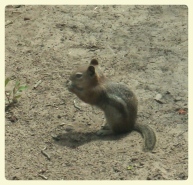 This incident occurred a few months ago when I was staying in the Kaibab National Forest. I had spent a day in Kanab, UT, and, after doing some grocery shopping, I set up camp in the forest for another couple of weeks.

From all of my time spent in the presence of critters other than human I know it is wrong to supply food items that are not a natural part of their diet. But, this time I did it anyway. I want to apologize to those little guys that ate the food I supplied. At the time, I’m sure they enjoyed it, but may have paid a price later.

To the best of my recollection, this is what transpired:

When I left the grocery store in Kanab I was in possession of a fine looking cantaloupe. It smelled great, it felt great, and later that day I found out it tasted great. I had cut into this beautiful melon, scooped out the seeds, and cut it into long slices, freeing the juicy meat from the rind. After eating my fill I still had about eight of those slices left. I laid them gently into a container, snapped the cover into place, and placed them in the refrigerator. 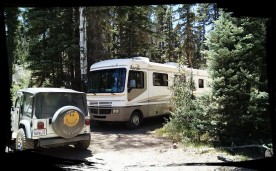 Throughout the course of the next week I ate the majority of that melon, leaving only two slices, which I forgot about. When I discovered what I thought was a great find hiding on the bottom shelf behind the left-overs I seem to collect I was overjoyed. That happy state did not last long. It had been almost 10 days and that fruit looked a little too slimy for my taste. I think it was even trying to grow a little hair. This is where I erred. Once again, let me say it was wrong of me to do what I did, but I did it anyway.

I don’t leave my unwanted food for the critters to eat. I do not toss my apple cores into the forest, leave potato chip crumbs for the squirrels, or stale cake for the birds. I figure it upsets their little bellies, and I don’t want to be the cause of an illness I cannot cure.

But, this time I fed the animals. I took those two slices of cantaloupe about 50 feet into the forest and left them for the crows that were so numerous around there. I thought for sure that the fruit would be gone in a matter of minutes. It didn’t happen quite that way.

I was sitting in my gravity chair reading a book I can’t remember the title of and keeping a watch on my discarded edibles.

It didn’t take long and a couple of crows showed up and began arguing over one of the slices of cantaloupe. Two crows. Two slices. Problem solved. But, no. Not so. Those birds were actually trying to outdo the other and fly away with that single slice of fruit they were focused on. During the course of their scuffle that piece of cantaloupe broke in two, whereupon each bird grabbed a half and flew off. I guess they figured they had outdone the other. Meanwhile, the other slice of cantaloupe laid there, lonely and forgotten.

About 20 minutes later a chipmunk slowly approached that orange oddity that was decorating the forest floor. That little critter eventually made its way to the fruit and sniffed all around it. It rushed in and took a bite and jumped away to chew and swallow what it had found. It must have liked the taste because that little guy (or gal) ran back up to that slice of fruit that was bigger than it was and began eating on it. Another chipmunk ran up to join the first, but this is where the fun began. Fun for me. I’m not sure about fun for them.

The first chipmunk, let’s call her Dale, seemed to be rather selfish. She was not going to share the cantaloupe with the second chipmunk. Let’s call him Chip. Dale stood on her hind legs and began chattering away at Chip. Chip, like any man being lambasted by a woman for doing something he does not remember, sat quietly and listened. I guess he listened until he’d had enough, because he stood up and gave back just as good as he was getting.

It didn’t take long and Dale came to the end of her patience. She grabbed an end of that cantaloupe, raised her head high into the air, turned, and ran off like she was being chased by the gestapo. Run like you stole it, Dale. Run like you stole it. Hot on her tail, Chip followed, not far behind.

I’m not very conversant in chipmunk-speak, so I am not going to attempt to tell you what these two little critters seemed to be arguing about. It appeared, though, to be an argument from where I was sitting. Dale had the goodies. Chip seemed to want a piece of the pie, so to speak, but Dale had other ideas in mind.

Here is where Dale made her first mistake. She had an end of cantaloupe held firmly in her jaws. I figure she wanted to know if Chip was gaining on her, so she took a chance to look over her left shoulder. In doing so she raised one end of that slice, which caused the other end, the long end, to dip slightly. It dug into the ground. When it did that the end that Dale had hold of raised quickly into the air, little Dale holding on for dear life. Like a pole vaulter, Dale was flung into the air and slammed down onto the ground when that piece of fruit landed. That was when she lost her grasp on the cantaloupe.

Dale quickly jumped to her feet, spun around, and began chattering away at poor Chip. He had come to an abrupt stop when Dale was flung into the air and was staring at the spectacle in front of him. Dale didn’t get off too many words, because Chip quickly came to his senses. While Dale was busy yelling profanities at Chip he ran up, grabbed that cantaloupe between his teeth, and took off like his ass was on fire.

Do you remember Yosemite Sam and his long orange mustache? When he was running across the TV screen his mustache would flow out behind him, fluttering in the wind. That was what Chip looked like. He had snatched up that slice of cantaloupe in the middle and the two ends were stretched out from the side of his head, curved back like a couple of pipes coming from under the hood of a 32 roadster. His head was held high, the orange ends of the cantaloupe streaming alongside his ears and back beside his body, and he was running for all he was worth.

Dale was taken by surprise, but it didn’t take her long to recover. She was after that thief like she had been shot from a cannon. The last I saw of those chipmunks and their cantaloupe was when they disappeared over the rise, and out of my view.

Once again, I want to apologize to those little critters. I’m sure they got their bounty home to share with all the other little chipmunks, but it not being part of their normal diet I’m afraid it may have caused some problems. Momma chipmunk was probably happier than hell, just knowing she didn’t have to worry about dessert. Or, maybe Dale was momma chipmunk and she was just trying to get a treat home for all the little chipmunks. In either case, I fear that sometime in the middle of the night the revenge of the cantaloupe may have reared its ugly head and made a mess of things.

I’m sure we’ve all been there. You eat some tasty morsel that doesn’t settle quite right, and sometime in the middle of the night you have to jump up and run down the hall to that little room…well, you know what little room of which I speak. I doubt that the chipmunk family has a little room in their warm little den. They probably have to run outside for that business. It’s dark out, and there are mean, ugly things out there that want to eat them.

Suppose, as he made his way outside, Chip hesitated at the door, just checking to see if the coast was clear. He had his head poked out the door, making sure it was safe. Dale, little belly all swollen and cramping, ran into Chip, knocking him off his feet. Momma chipmunk was on her way out the door at full speed when she tripped over Chip and Dale, losing control of her bowels. It would have been a real mess for sure.

I won’t go into anymore details, but I think you get the idea. The next time I’m in the area I’m going to look up those little chipmunks and offer up an apology. Meanwhile, I hope the mess wasn’t so bad they had to find suitable housing elsewhere. I can only hope.

1 thought on “The Cantaloupe Wins”