I woke up cold this morning. I take that back. I wasn’t cold when I woke up, but I was subjected to a very rude awakening when I rolled out of my quite warm bed. It was 38 degrees at 5:30. I should have checked the temperature when I planted my feet firmly on the floor at 4:15, but I had other things on my mind: coffee, and bladder. Not necessarily in that particular order, either.

If you haven’t guessed, I’ve moved. I suppose I grew tired of the sand. I’m pretty sure that if a body of blue water, with waves gently caressing the shore, had been nearby I might have considered staying longer. The sun has a way of warming this aging body, and, believe it or not, I rather like a warm, comfortable setting where I can enjoy what the days bring my way. You know, just sit in the shade and watch the sun slowly make its way across a blindingly blue sky. I find it educational watching it chase all the critters to cover, only to have the resilient wildlife reappear once the day fades to evening, and the temperature begins to descend into the chill of night. The animals of nature are smarter than we humans. If you haven’t figured that out by now you should spend some time in the desert, or the mountains, or…well, just spend some time beyond where the asphalt ends. 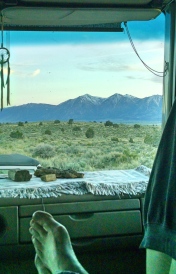 I’m now south of Carson City on public land (BLM). I’m parked on the east side of Hwy 395 in the rolling hills where I can see the valley below me and the Sierras to the west and south. It’s a great spot. The only thing I did not take into account when I parked here is the fact that it takes awhile before the sun shines its warmth down on my house. That would be a good thing when the heat of the afternoon grabs hold and shakes like hell. But it sure isn’t helping any this morning. While the valley, and the mountains to the west, are basking in the morning light I am still in the shade of these mounds of dirt and rock that surround me to the east.

Currently, I am watching several rabbits greet the day, much like I am—slowly. I mention these fast moving members of the staple of the coyote diet (I was awakened during the night by a couple of the wily critters serenading the denizens of the desert while I was trying to catch a little sleep) because of the stark contrast to their cousins who reside near Sand Mountain. Those jackrabbits who call that particular area home are huge, and fast. I’ve seen a few rabbits in my time, but these guys look like bunnies on steroids.

How interesting nature is. The rabbits at Sand Mountain have very few places they can hide from predators. Not only do they have to concern themselves with the coyotes on the ground, but the winged hunters in the sky are a constant surprise. So, they’ve adapted to their environment. They need to be fast to outrun the predators on the ground, and they’ve grown large in an effort to dissuade the feathered hunters of the sky.

The rabbits where I currently call home have grown lazy. Yes, they are still hunted by the wily coyote, and have to contend with the not so smart city dogs who have owners that walk them through the area at daybreak. The predators from the sky are a constant concern, but these rabbits have way more places to hide. Their food supply is plenty, and I’m sure that the human population in the area has chased many of the rabbit’s hunters further away. They can lazily go about their day, eating when they’re hungry, and resting when they’re tired.

Let me tell you about yesterday. When I left Sand Mountain I was planning on spending the night at the fairgrounds in Fallon. I called ahead to make sure they had hookups and there was room for me. The lady I spoke to assured me that I would have no trouble finding a spot. What a way to dump my holding tanks, fill up on fresh water, and charge all of my battery operated electronics—all for $20. I didn’t feel like doing much traveling, and with something like that less than 30 miles down the road I considered it a bargain.

Here’s where things get interesting. I didn’t want to get all set up and then go do my shopping, so I visited WalMart, Ace Hardware, and a local grocery store before finding my way to the fairgrounds. When I got there I noticed that the place was flooded. My first thought was that they had a broken water main. That was not the case. Yesterday was Wednesday. Wednesday is the day they flood irrigate that particular section of the grounds. The lady on the phone did not mention that little fact. Nope. Not a word.

Well, I could either wait until later in the day when the sandy soil would be somewhat dry, or I could move on. I chose the latter. So, I paid $5 to dump my holding tanks, and another $5 for water. Not a bad deal—except the water part. For $5 I got five minutes of water flowing at the rate any city water would flow. Typically, that is about six gallons, or so, a minute. That works out to about 30 gallons. Rather expensive if you ask me, but I am in a desert environment. I needed about 50 gallons for a full tank. Either I paid another $5 or leave there with only 3/4 of a tank of fresh water. Since I barely used half a tank while at Sand Mountain I opted to live on about 80 gallons for the next week.

I stopped for a pretty decent burger and fries at a little bitty casino in the middle of nowhere, and still made it here by 3:00. Not a bad day on the road. Except for the traffic through the outskirts of Carson City. It’s been awhile since I’ve been in this part of the state. It’s amazing how many people have moved here—all of them to a place where the summers are hot, the winters are cold, and the water is scarce. There’s still snow  in the mountains around here, and yet the days are beginning to get quite warm.

This is what I woke up to yesterday: 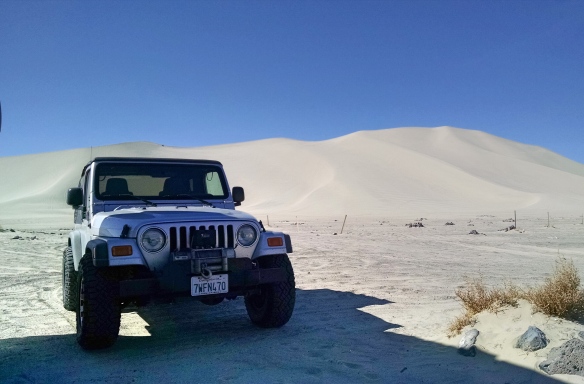 This is what I woke up to this morning: 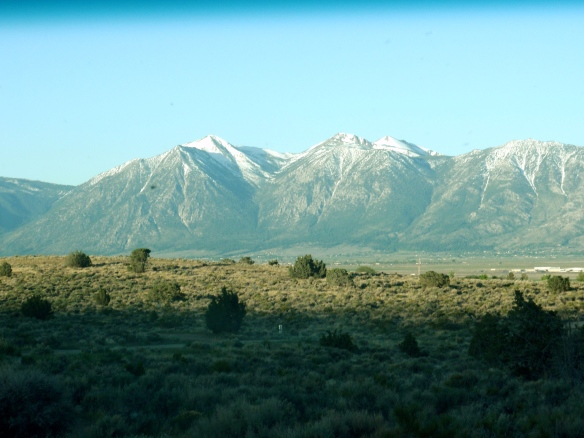 What a difference a couple of inches make on a map.